Back in 1996, a revolution occurred in Australia. Suddenly, when you bought a packet of chips you didn’t just get chips – you got a little plastic or cardboard piece of marketing fluff designed to make you feel like you didn’t just get a boring old packet of chips. Frito-Lay’s Tazos were first – little plastic disks designed to compete directly with POG. POG had landed in 1993 and even though most people didn’t know what the hell they were, they knew they had to have them. POG took off like wildfire, and it wasn’t long until the pretenders surfaced.

Most notable of these were Glo Caps, produced by Glow Zone, a company well known for making the little glow in the dark stars and planets you had stuck on your ceiling as a kid, and then couldn’t be bothered to remove when you grew up so they’re probably still there now. Glo Caps arrived in 1993 to directly compete with POG’s popularity, and with the added novelty of glow in the dark, they were a hit. Two series of the Glo Caps were produced at first, both sporting surreal, Mambo-esque artwork. The Glo Cap brand got a big boost when a series themed around the Simpsons was released in early 1994, and at this point some parent at Frito-Lay must have realised how criminal it was to have to pay $4-plus for a packet of caps to make their child happy.

The unlikeliest playground status symbol ever.

That person had the brilliant idea to include them FOR FREE with chips. This was a revelation, as every school canteen that stocked chips was instantly a way to get a fix. This meant it was no longer a matter of waiting for a trip to the newsagent and then subtly suggesting to whoever had the money that you needed a packet of POG – all you had to do was ask for a lousy $1 or so for a packet of chips at school. Bins at schools everywhere were suddenly filled with opened, but uneaten, packets of chips as the Tazo craze took over. Tazos even upped the ante by releasing a lenticular Simpsons range. It speaks volumes about the power and credibility The Simpsons had amongst ten year old kids in 1996 that their appearance on little trinkets could change the tide of a popularity war between novelty companies. Again, no one knew what exactly a Tazo was, or what language Tazo and POG came from, but you HAD TO HAVE THEM, even if you had to buy cheese and onion flavoured Thins to get them.

Glow Zone meanwhile were sitting around in warehouses full of unsold Casper Glo Caps, wondering what happened. Someone must have gone to the vending machine and found out, because in 1995, they released their own potato chip chaser cards – Oddbodz. Oddbodz were like an amalgamation of every pocket sized craze that had come along thus far; for one, these weren’t your daddy’s caps – they were full sized cards, designed to recall the basketball card fad of 1993. They glowed in the dark, just like your room’s solar system. They featured a variety of surreal, freaky monsters, just like Monsters in My Pocket, and best of all, they were free. I can’t overstate how much something glowing in the dark added to its playground value back then. These weren’t just pictures of Shaq and Pooh Richardson – they were Nerdy Neville and I.P. Freely, and they GLOWED IN THE DARK. When it was time to turn out the light, Mimi Screami didn’t disappear like Bugs Bunny’s Tazo did, she LIT UP THE ROOM. One Oddbod was worth two Tazos in a trade – it was as if they’d printed money.

Even better, some of the Oddbodz randomly included a HOT feature, which meant there was a small area somewhere on the card that was covered in a special ink that would disappear when vigorously rubbed. These were the playground equivalent of a dime bag of China white. On top of all that, they had all kinds of added features on the backs:

You could link stories together or attach Frogulox Bleeemo’s ass to Ghosti Girl’s torso, and you’d CALL IT ENTERTAINMENT. Glow Zone hadn’t stuck to kids’ ceilings for years by resting on their laurels, though. The fact that they released about 6000 Glo Cap sets stands as a testament.

In 1996, they released SPACE ODDBODZ, which took the bizarre characters from the first set along with many new ones, and unleashed them in space. If possible, these were even more popular than the first set. Let’s take a closer look at ten of the more out-there Space Oddbodz. 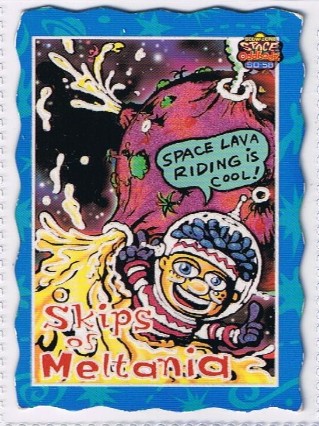 It’s a little known fact that Skips of Meltania were actually Smith’s Chips’ new product launch for 1996. Skips were like prawn crackers, only tangier, and because marketing dudes don’t miss a beat, Space Oddbodz = free advertising space. The chips didn’t last though, and this card is the only reminder that they ever existed. Design-wise, the card is much like its snack namesake – Skip has a pretty bland, generic character design, and the gimmick is weak.

A lot has changed since 1996 – I don’t think that these days you could get away with marketing to kids a picture of an astronaut who has released such an astronomical load of piss in his spacesuit that it’s bursting at the seams and creating urinous ice cubes. Well, maybe you could, but you certainly couldn’t show him liking it. It doesn’t get much more gross than that… 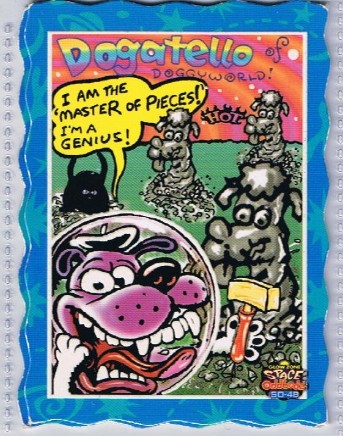 …unless you count an artist dog making sculptures out of his own scumber. 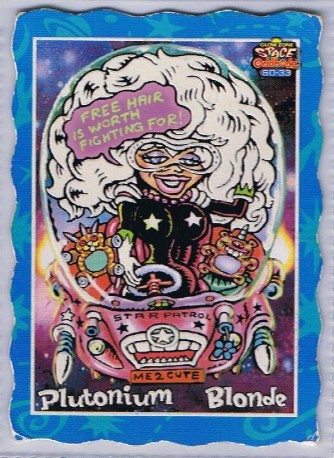 Back in primary school, nothing got you called ‘gay’ faster than getting this card in hot, and having to rub Plutonium Blonde’s chest to get the most out of the novelty. These days though…no, it’s still a bit creepy.

Those marketing guys…Gobbledok was Smith’s Chips’ marketing mascot in the late 80s and early 90s. He was a phenomenon – trucks carried his likeness, his TV ads ran around the clock. I always thought he was pretty light on imagination though – he was like the love child of ALF and Doug Mulray. 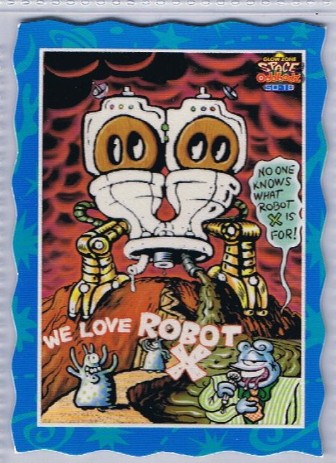 This card is the scatological equivalent of those pantomimes where the one you’re looking for is ‘BEHIND YOU!’

They’re the same damn concept. And worse, they’re numbered right beside each other in the set. The iiiiimagination is just eye-popping.

So this guy’s whole schtick is that he hypnotises ‘NUTSA’ astronauts long enough so he can punch them? What does he do now that Pluto’s no longer a planet and no one cares? And are those I.P. Forever’s piss-cubes there on the ground?

At first it seems like the Oddbodz creators finally showed some restraint – there’s not a single anus gag to be found…on the front. Turn it over however, and every one of the linked tales has a terrible ‘your anus’ pun included. That aside, does he have a dick for a nose? 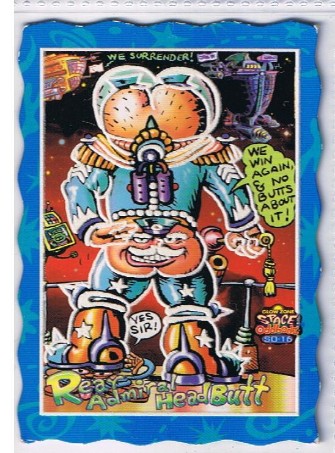 This one was controversial in 1996 – apparently TOO controversial to go out as originally designed. At some point the more explicit art was pulled from circulation and replaced with a censored version. 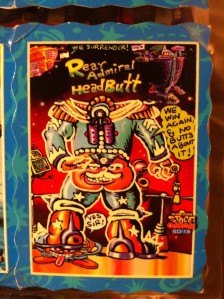 The second version makes a lot less sense; yes, he still has a head for a butt. But where’s his head? Why did they censor this, but leave cards like Solar Wind Kid (just guess) and Inside Outa available to corrupt the minds of innocent children everywhere? We may never know.

What is known is that the Oddbodz series produced after these featured likenesses of contemporary AFL players. Oh those poor, innocent children…