Have you ever wanted something you know you can never, ever have under any circumstances? This is a tale of pain and longing, magic and horror, loneliness and anguish. This is a tale of obsession, and how it can take you to the furthest reaches of the world. Lemme tell ya a story…

Back in the days of the corner shop, lollies were a big deal to a kid. Do you remember walking up to that shelf full of candy, armed with a $2 coin that could fill your pockets? Chocolate bars were obviously top tier, but spare a thought, dear reader, for those lesser confectioneries – Fizzy Cola, Fanty, those soft teeth, Milkos, Redskins, Toffee Apples…

Spare a thought, if you will, for those little individually wrapped pieces of bubble gum. You know, the ones packaged with temporary tattoos or stickers. You’d get a tattoo of a spider, or a sticker of a popular cartoon character, and all for 10c. Getting that little extra often made you felt like you weren’t getting ripped off. That extra novelty added so much. When it came down to choosing a piece of the gum or a mini Redskin, you’d suddenly picture that empty spot on your school folder that could do with a sticker of Pikachu.

Unlike you, the companies that mass produced the gum didn’t care what was on the stickers. Unlike you, they didn’t care what the flavour was, even though you know it’s that pseudo-strawberry you can still taste late some nights. The flavour didn’t even last a full minute most of the time, but it’s still indelible. It’s probably the fact that it’s so fleeting that makes it so memorable – the entire time it’s hitting your tastebuds full force, you’re memorising it so that in 30 seconds time, when the gum tastes like Blu-Tack, you’ll be thinking about that flavour and wanting another 10c piece, which also means another sticker.

At first, the stickers are a novelty and nothing more. As a kid, you might stick them all over your bedside table or chest of drawers, and because so many varieties are available on that lolly shelf, you end up with random scenes from a dozen cartoon shows. Freakier still are the stickers based on an entirely original IP. I once bought two pieces of gum and wound up with two ghastly images for my drawers: one was a cartoon picture of a kid being hit by a truck. He’s bleeding…he’s screaming. His skateboard lies on the road beside the pool of blood, and the faceless truck driver is about to run over that too. Above the carnage is the caption, ‘Horror!’ Yes, it is, but worse still is the next sticker: a cartoon picture of a jar full of eyeballs, severed limbs and…cherries. A label on the jar reads ‘Female Body with Cherries’. The caption above the scene reads ‘Ho Ho Horror!’, as if we’re laughing. As if ‘Female Body with Cherries’ is a joke, or witty at all. Even more disturbing is the idea that while the body parts in the fruit jar is meant to be the comedy variety of the sticker, that screaming kid being hit by the truck is just meant to scare you. It’s horror, and your red piece of chewing gum doesn’t seem so tasty now.

Eventually, if you buy enough of the gum at your corner shop on a whim, you end up with a fair amount of stickers. They’re often numbered, and you might get a streak: 5-8, 13-20. They might tell a story, or form a larger image. Something hooks you, and suddenly you wonder what’s stopping you from collecting the whole set. I mean, it’s not like you don’t buy the gum all the time anyway. Oh look, you just got number 22. It’s just that…you’d feel silly, wouldn’t you? Silly that you suddenly care about some cheap, stupid stickers that come with gum you buy because you’ve got 10c to burn and you don’t want two milk bottles. And yet…you wonder what number 21 looks like.

What better way to showcase this new look that with a series of gum stickers? The set was released in 1996, but somehow took two years to arrive at my corner shop. When they did, they were an instant hit. Finally, an IP we recognised! They were numbered. They were based on a game we played. They were 10c! The Street Fighter Alpha stickers filled the void that Oddbodz and Tazos had left, and unlike those trinkets, these could be stuck on schoolbooks and bedheads alike.

My wall was covered in them, particularly the ultra-common number 18. It felt like the rarity of each sticker came in waves. One month, number 20 would be all over your wall, and number 24 would be gold. The next, number 5 would be hated for being everywhere and number 29 would be hated for being nowhere. It was dynamic, and at 10c a pop, maddeningly addictive. Never did we stop to realise that something had gone fundamentally wrong – the stickers had overtaken the gum.

Not that we didn’t have fun with the gum; we were buying so many pieces trying to get those rare stickers, we’d end up with a tonne of the stuff. At one point, we had a contest to see how many pieces we could fit in our mouths. I’m man enough to admit that I won, with 23 pieces. When I finally spat it out, it looked like a tennis ball-sized brain.

The addiction worsened. We bought out the corner shop’s entire supply of Street Fighter gum, and the wait while the shopkeeper reordered was murder. When they finally arrived, we were furious – he’d ordered the wrong gum. The Street Fighter box was red, and in his ignorance he’d ordered another red box. Unfortunately, this red box was of gum with lame tattoos. Tattoos! We shouted at him for getting the wrong ones, and he informed us that he’d only get the Street Fighters back if we bought him out of the tattoos.

We looked like Kat Von D by the time the next box of Street Fighters showed up, and when it did, it came with a surprise. The shopkeeper didn’t just hand us our sacks of gum; he gave each of us a sticker album. This was a revelation – finally, we had a place to put our stickers. The album featured a series of monochrome placeholders for each sticker, which you’d then cover up once you got the corresponding sticker. At last we discovered just how many of the damn things comprised the whole set: 33.

All of a sudden, the race was on to complete your album. Double after double, piece after piece. Former commons became rare, former rares became wallpaper, but the true ultra-rares finally became apparent. By the end of the year, three of us had near complete albums. Only one sticker remained elusive – number 33.

We bought hundreds of stickers between us. We literally could have wallpapered an entire room with number 18. None of us ever, EVER got number 33. It was so damn rare that I’ve never even seen its image anywhere on the internet or elsewhere (UPDATE: RAE over at the amazing Street Fighter Miscellany has found the image. Not the sticker though. That ain’t happening.).

The monochrome facsimile on the back of the album stared out at us, mocking us. It waited and waited for us to finally open a 33, peel it from the backing and affix it, covering up the shame of an unfinished album. But the relief never came, and before long the shopkeeper had sold out once more, and informed us that the supplier had run out.

That’s right, we’d bought out the supplier, and still no number 33.

The internet has proven useless. I have never, ever seen the album on any site, anywhere. The only evidence that they ever existed outside of the album I still own was a long-since-completed auction on eBay Germany for Street Fighter Alpha kaugummibilder, and another site selling a German equivalent of my album.

But it’s not my album.

There are two companies listed on the back of my album. Vidal Golosinas made the gum, and still makes confectionery today. Kuroczik Susswaren (sweets), on the other hand, appears to have made the stickers, and many other sets along with them, but it’s unclear whether or not they’re still in business.

Long ago, I accepted the fact that I’m almost completely alone in the world in owning (and caring about) this sticker album. This incomplete sticker album. The worst part is, it can never be complete. I’ve never even found the gum again, let alone the album.

I may own one of the rarest items in the world, and let me tell you, it’s a horrible feeling. So now I’m here, the last attempt at raising some kind of awareness of this. I could be completely wrong, and this Super Album could be completely common. Someone out there might have a room covered in number 33. I’ve never wanted to be wrong about something this much in my life. If you do know something…anything…let Wayning Interests know.

But somewhere, deep in the back of my mind, I know I’ve got this curse for life. Look upon it, ye Mighty, and despair. 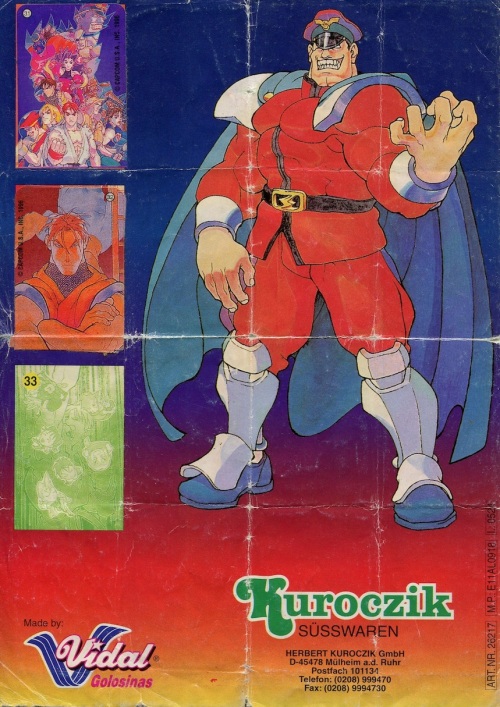 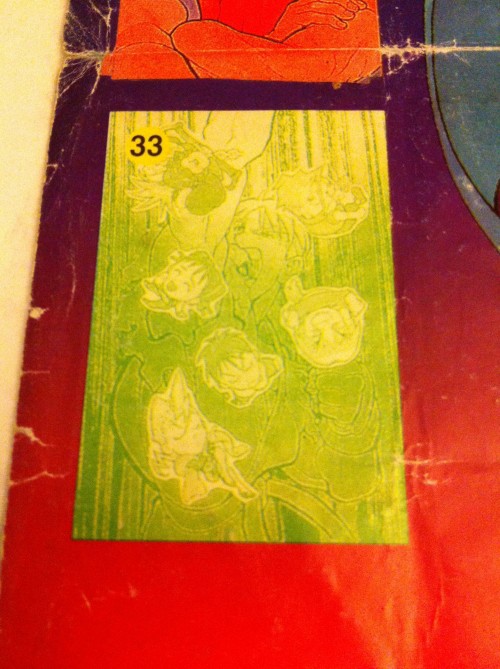